After the Crabb Family retired in 2007, Aaron Crabb formed a duo with his wife Amanda. Their first three CDs were released by Daywind Records.

In 2011, Aaron became the lead singer for Canton Junction, a quartet formed by Matt Hagee. He also joined the staff of John Hagee's Cornerstone Church in San Antonio, TX.

2008 After The Rain (Daywind Records): After The Rain; To Know You Are Near; Thou Art Worthy; Miracle; Everything; Not Ashamed; Alpha Omega; Give It All; Strength; God Will Make A Way; Eli's Track.

2009 Live At Oaktree (Daywind Records): Please Come Down To Me; After The Rain; Miracle; No One Else Like You; Thou Art Worthy; The Name Of Jesus; Amazed; Less Of Me; As The Deer; You Are So Beautiful; Give It All To Him.

2010 Love With No End (Daywind Records): The Name Of Jesus; God's Unchanging Hand; You Never Know; King Of Glory; Love So Amazing; Healer; You Gotta Move; Bless Your Name; Love With No End; King Of Who I Am. 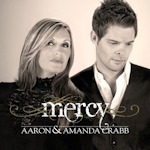 hi-res
2013 Mercy (Difference Records): If I'm Guilty; Somethin' Bout Love; Take Him To The Place; I'm Learning; God Loves The Broken; Holy; It's Gonna Rain; Without You; Come On, Come On; Reaching Out; Guide Me.

2016 Restore (Difference Records): Time Flies; The Water; Two Coats; Restore Me; Washed Away; Your Blood; I've Seen What He Can Do; Kingdom Come; Back Together; Mercy On Me; He Looked Beyond My Faults; I've Got The Victory; Miracle.