The forerunner to the Dixie Four Quartet was organized in Jackson, Mississippi in 1938 by Gene Lowery, who was a radio personality and a church music director. The early group was called the Stamps Gospel Four and was composed of Lowery, Hubert Hanna, A.D. Huffman, Lloyd Cotten, with Miss Marion Robinette, pianist.

The quartet moved to Memphis in March, 1940 to sing on radio station WMC. They were affiliated with the Stamps-Baxter Music Company and were called the Stamps Dixie Four. The members pictured in the Stamps-Baxter Album in 1940 included Gene Lowery, Hubert Hanna, Lloyd Cotten, Melvin Doss, and Voline Akers.

In the Spring of 1941 Gene Lowery and the others of the Dixie Four parted company. The remaining group became known as the Stamps-Baxter Dixie Quartet. Bass singer Carl Rains was their leader. They left Memphis and joined WDZ radio in Tuscola, Illinois. Then they moved on to Beaumont, Texas and later to Jackson, Tennessee before wartime rationing limited their ability to travel. Unable to make a living, the group disbanded in 1942.

A few years later, the Stamps-Baxter Dixie Quartet name would resurface. Click HERE to read more about that group.

Shortly after his quartet members had moved on, Gene Lowery re-started his Dixie Four, affiliated with the Vaughan Music Publishing Company. Group members were Melvin Doss, Gene Lowery, Irby Palmer, Chalmers Walker, and Voline Akers. After a few months, Irby Palmer left and Byron Faust joined the group. The Vaughan Dixie Four continued operating for most of the remainder of 1941 and well into 1942. They disbanded for about a year and a half due to wartime military service by Lowery and others in the group.

In 1946 they moved to Indianapolis, Indiana where they performed regularly on WIBC radio. By 1947, they were heard on the Mutual Broadcasting System which carried its programming from coast to coast through hundreds of affiliate stations. The members around that time were Melvin Doss (tenor), Gene Lowery (lead and emcee), Loyal Shorty Green (baritone), Olen Honey Dunn ( bass), and Herschel Collins (pianist). Dunn was a former bass singer for the Lone Star Quartet. Melvin Doss left in late 1947 and was replaced at tenor by former tenor Eiland Davis. This lineup lasted for around two years.

Gene Lowery, who also had various business interests, transitioned away from his regular singing role after Joe Thomas joined the group in 1949. Herschel Collins left the Dixie Four and became an evangelist and a pastor. Before long, Davis and Green were gone. Norman Wood, formerly of the All American Quartet, joined Dixie Four. After some additional turnover, Reece Crockett came back at piano. Although there were a number of personnel changes during the early 1950s, Thomas, Wood, and Dunn remained.

In 1952 Gene Lowery sold his businesses in Indianapolis and moved to Olney, Illinois, where he became affilated with the Southland Quartet.

A later lineup of the Dixie Four included Joe Thomas (tenor), Norman Wood (lead), Melvin Redd (also formerly of the All American Quartet, baritone), Olen Dunn (bass), and Danny Koker at piano. They appeared regularly on television in the region. Koker moved on to the Weatherford Quartet in late 1954. He was replaced by Wayne Griffin, another former member of the All American Quartet.

By January 1, 1955, the Dixie Four had relocated to Shenandoah, Iowa and had joined KMA radio. The members were Joe Thomas (tenor), Norman Wood (lead), Melvin Redd (baritone), Tommy Mitchell (bass), and Wayne Griffin (pianist). The Dixie Four continued to operate until they disbanded around the middle of 1955.

The Dixie Four recorded on the TruTone label, on Gene Lowery's own "Gospel Records" label, and later on a Dixie Four private label. Recitations were an integral part of their radio and television broadcasts and were included in the several songbook editions they published. The Dixie Four tended to sing the songs as written with less variation from the original compositions than some other quartets of the period. They did, however, include some of the more jazzy numbers that were being sung by quartets farther south. Following Lowery's departure, with Reece Rocket Crockett at the piano, more entertaining arrangements were added. Another feature, while not unique to the Dixie Four, was their inclusion of an organist in addition to the traditional pianist as a regular member of the group. As was the case for several Dixie Four lineups through the years, the Dixie Six might have been more accurate. Bill Gaither has said that Gene Lowery and The Dixie Four Quartet was an important model for him as he entered and progressed in the gospel music profession. 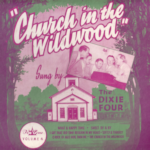 1950 (Gospel Records 508): When They Ring The Golden Bells; Beautiful Isle Of Somewhere.

195? (Gospel Records 514): Where Is My Wandering Boy Tonight; Mother's Prayers Have Followed Me.

195? (Gospel Records 515): When He Reached Down His Hand For Me; The Old Account Was Settled Long Ago.

(Most of the Gospel Records recordings were issued in both 78 and 45 RPM).