Eva Mae Whittington was married to Urias LeFevre in 1934. They formed the Lefevre Trio along with Urias’ brother Alphus and frequently performed at revivals where Eva Mae’s father, Rev. H. L. Whittington was preaching. The LeFevres were the first full time gospel group to be based in Atlanta, GA. Eva Mae was forced to manage the group a few years while Alphus and Urias left to fight in World War II. After the war, Eva Mae and Urias had five children.

As Eva Mae’s children grew older, they began to join the group on the road. Pierce played trumpet and sang. Meurice and Andrea played saxophone and trombone. Mylon sang and is the credited writer of the song “Without Him.” With Eva Mae’s popularity as a pianist and emcee, the LeFevres became part of a television show called the Gospel Singing Caravan. The Caravan also toured together. Later Jerry Goff, who was married to Andrea Lefevre at the time, produced The LeFevre Family Show for television.

Eva Mae was the last LeFevre to sing with the group. She left the road in 1977. By that point, Rex Nelon was managing the group and his daughter Kelly was a group member as well, so Nelon decided to change the name to the Rex Nelon Singers. Eva Mae continued to appear at various reunion functions such as the Grand Ole Gospel Reunion and on the Gaither Homecoming video series. In fact, she was on the first Homecoming video that started the successful series. After Eva Mae went to the piano and began playing that day, the other artists gathered around and began singing. That impromptu session was caught on tape, and the rest is history. 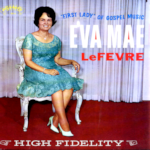 hi-res
1965 First Lady Of Gospel Music (Sing Records/MFLP 3214): I Walk With Jesus; The Saddest Story; I'm A Millionaire; I Shall Not Pass; My Only Hope; Then The Answer Came; This World Is Not My Home; Just Over In The Gloryland; I Must Tell Jesus; Tis So Sweet To Trust In Jesus; I've Got A Longing; Leave It There.
All articles are the property of SGHistory.com and should not be copied, stored or reproduced by any means without the express written permission of the editors of SGHistory.com.
Wikipedia contributors, this particularly includes you. Please do not copy our work and present it as your own.