The Monitors Quartet was organized in Indianapolis, Indiana in the fall of 1957 by Horace Floyd, when he, baritone Ned Williman, and pianist Don Ritter left the Swanee River Boys, also of Indianapolis. The Swanee River Boys sang a mix of gospel and secular music. The Monitors Quartet was created as a gospel group. Floyd, who sang the tenor part, assigned the duties of lead singer, emcee, and group manager to Bill Nelson. Although Nelson had prior experience with a part-time quartet in West Virginia, this was his first professional quartet job. Veteran low-down bass singer Warren Holmes, formerly with the Blackwood Gospel Quartet, Bobby Strickland's Crusaders, and the Foggy River Boys, joined them to sing bass.

The Monitors were affiliated with the Cadle Tabernacle, which was a large, interdenominational Christian church in Indianapolis. Their building seated over 10,000 people, and the church had a far reaching radio ministry on WLW radio in Cincinnati. The Monitors performed on radio beginning at 5:30 AM, seven days per week. The Monitors were known for close four-part harmony with no "stars," much on the order of the Stamps-Baxter school that most of them had attended.

In early 1958, Floyd left and later went into the ministry. Holmes also left around that time. Personnel turnover required reorganization more than once. Bill Nelson was the only member who lasted throughout their run; however, baritone and pianist Ed McCartney and bass J.B. Short were relatively long-serving members. The Monitors appeared as a trio at times. Future Statesmen Quartet bass Ray Burdett sang with the Monitors as needed for several years beginning while he was still in high school. Around 1963, Warren Holmes returned to the Monitors Quartet, and they recorded their first of four LP records. The lineup then included Glen Adamson, tenor; Bill Nelson, lead; Richard Cherry, baritone; Warren Holmes, bass; and Mel Baker, pianist. They re-organized in early 1966 as "New Sound of the Monitors." The Monitors disbanded around the end of 1966 when Bill Nelson joined the Swanee River Boys.

Around 1980, Lem Kinslow organized a part-time version of the Monitors Quartet in Nashville with Bill Nelson, Hal Morrison, Kinslow, Ray Burdett, and Jeff Stice. Ray Burdett left the Monitors half-way through their first recording session (for the LP Praising Him) to work with country music star Loretta Lynn in early 1981. Ray was replaced by his brother, Michael, who finished the recording and remained with the quartet until the group disbanded in late 1981, after appearing at the National Quartet Convention.

1964 What A Friend We Have In Jesus (Monitor Records): What A Friend; Teach Me Lord To Wait; Do A Little More; Yes, I'm Satisfied; Dear Jesus, Abide With Me; Wasted Years; All Aboard; I'm Ready To Be Born Again; One By One; Sweeter As The Days Go By; Take My Hand, Precious Lord (Glen Adamson, Bill Nelson, Richard Cherry, Warren Holmes, Mel Baker). 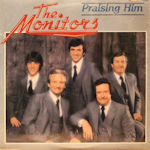 hi-res
1981 Praising Him (Zondervan Records/ZLP-3194): Praising Him; I Get Happy; Take Me Back To Calvary; Singing Through Life; Heaven Will Surely Be Worth It All; What A Friend We Have In Jesus; I Wish I Had Heard; Just As Long; Telling The World About His Love; When The Last Song Is Sung (Hal Morrison, Bill Nelson, Lem Kinslow, Ray Burdett, Michael Burdett, studio musicians Tony Brown and Gary Prim on piano along with Jack Eubanks, Tommy Hensley, Jerry Kroon; Jeff Stice-member, but not on record).

1983 Pure Southern (Evertide Records): All Because You Love Me; Crossing Chilly Jordan; Reining In God’s Kingdom; Time To Celebrate; When I Move Up To Heaven; Until I See His Face; Going Up To Be With Jesus; Living Sacrifice; He’s Coming Soon; He’s Alive And Well (James Meredith, Greg Alexander,Lem Kinslow, Ronnie Page, Jeff Stice, Darrick Kinslow).