Sherrill Nielsen was a successful Southern Gospel tenor singer. He later legally changed his name to Shaun Nielsen. He served long stints singing tenor for the Statesmen, the Imperials, Songfellows Quartet, the Speer Family, and the Masters V. He briefly performed with the Plainsmen. He passed away from lung cancer on December 10, 2010. 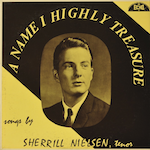 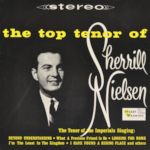 hi-res
1964 The Top Tenor Of Sherrill Nielsen (Heartwarming Records/Benson Records/Stereo Version LPS 1774/High Fidelity Version LPHF 1775): Beyond Understanding; A Place Of Peace; The Circle Of His Love; I Have Found A Hiding Place; What A Precious Friend Is He; I'm The Least In The Kingdom; Lord, Show Me The Way; It Matters Not; Longing For Home; He Is So Precious To Me; Spreadin' A Little O' Sunshine; Troubled Heart. 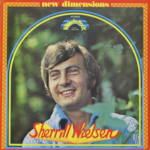 hi-res
1970 New Dimensions (Woodstock Records/WDS 1974): Games People Play; I'll Make It; Do You Know; Where No One Stands Alone; What The World Needs Now; Joy In The Morning; If That Isn't Love; Old Gospel Ship; Jesus, Take Hold; How Great Thou Art.