Smitty Gatlin was a native of Prospect, Tennessee, the son of Margaret and Frank Gatlin Sr. In 1956, Gatlin caught the ear of promoter Wally Fowler. Soon he was managing and singing lead for a backup group called the Country Boys. When the Oak Ridge Quartet disbanded in December, Fowler introduced Gatlin and the rest of the Country Boys on New Years Eve as the new Oak Ridge Quartet.

By 1958, Fowler had sold his interest in the group to Gatlin and the other group members. With the addition of tenor Willie Wynn, bass Herman Harper, and pianist Tommy Fairchild, they became one of the most popular quartets of the early 1960s.

It was during Gatlin's tenure that the group began to use the word "Boys" on their album covers rather than "Quartet." Fowler noticed the change and promptly formed another Oak Ridge Quartet. After an ensuing lawsuit, Fowler was ultimately forced to stop using the Oak Ridge name.

Gatlin resigned and sold his stock in the Oak Ridge Boys to the remaining members of the group in 1966, opening the door for their long-time lead singer Duane Allen. Gatlin had accepted the position of music director at the First Baptist Church in Fort Worth, Texas. He also formed his own group in 1966, the Smitty Gatlin Trio. In 1969, Gatlin returned to full-time singing and relocated to Killen, Alabama. He initially called his new group the Smitty Gatlin Singers, but that name soon reverted to the more established name, Smitty Gatlin Trio.

A year or so after returning to full-time singing, Gatlin was diagnosed with lung cancer. After fighting the incurable disease for eighteen months, Gatlin passed away in March of 1972 at the age of 37. 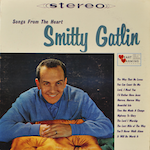 hi-res
1964 Songs From The Heart (Heartwarming Records/Benson Records/Stereo Version LPS-1778/High Fidelity Version LPHF-1779): The Way That He Loves; You Can Count On Me; Lord, I Need You; I'd Rather Have Jesus; Narrow, Narrow Way; Beautiful Isle; Time Has Made A Change; Highway To Glory; The Lord I Worship; The Last Mile Of The Way; You'll Never Walk Alone; It Will Be Worth It.